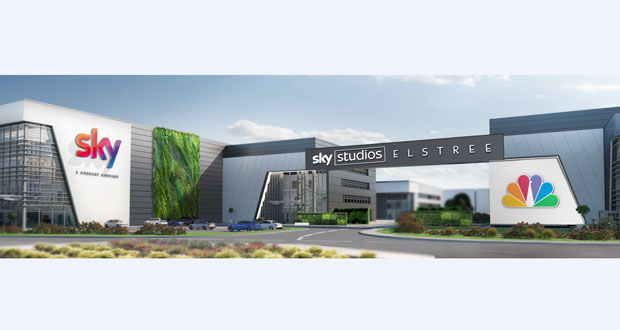 BAM has been appointed by Legal & General, Sky and NBCUniversal to create Sky Studios; the most sustainable film and TV studio in the world.

Set to open in 2022 just north of London, Sky Studios Elstree will house 13 sound stages and become home to a range of film and TV productions from Sky Studios and NBCUniversal, attracting £3 billion of production spend over the first five years of operation alone.

The project will play a key role in delivering Sky’s ambitions to become net zero carbon by 2030 and aligns with Legal & General’s drive to deliver major ESG (Environmental, Social and Governance) projects.

BAM has been selected by Legal & General, Sky and NBCUniversal for its expertise in constructing large scale projects and it will optimise the design for sustainability, including sourcing materials that are local and low carbon. The project will use circular economy approaches to reduce waste over the Studios’ lifetime.

Once operational, Sky Studios Elstree will not use gas or fossil fuels to power day-to-day running of the site – instead it will source renewable energy with the capability to generate up to 20% of energy on-site through solar energy. BAM Energy, part of BAM Construct UK, is assisting Sky to maximise the solar energy that is generated and used by the new studios.

In addition, Sky Studios Elstree will not allow any single-use plastic in its operations on site and has planned for how cast and crew will use the studio on a day-to-day basis, including green spaces and landscaping across the development. Sky will also harvest rainwater for use around the site.

Legal & General, Sky and BAM also have plans to use the scheme to help boost employment and skills in the local area of Borehamwood and Elstree too.

Through the construction phase, BAM will work with the local Job Centre Plus to offer a variety of construction related roles.  It will also offer apprenticeships, training and work placements for those who want to enter the construction industry, working alongside its supply chain.

Overall, it is expected that Sky Studios Elstree will lead to the creation of over 2,000 jobs in the local area, including 900 during the construction phase and 1,500 once the studio is operational.

James Wimpenny, CEO BAM Construct UK, commented: “We are proud to be an integral partner to achieving such an ambitious and sustainable scheme that will not only support the growth of the creative economy in the UK, but lead the way for others. This world class scheme reflects our own goals to be net zero carbon by 2030, to assist our clients in delivering net zero development and to enhance the lives of local communities, creating added social value.”

The design for the new studios is being delivered by UMC Architects, Fairhurst and Hoare Lea, with Potter Raper Partnership undertaking the quantity surveying and project management of the scheme.

Previous: OCS transfers compliance services to phs
Next: Simple and to the point!