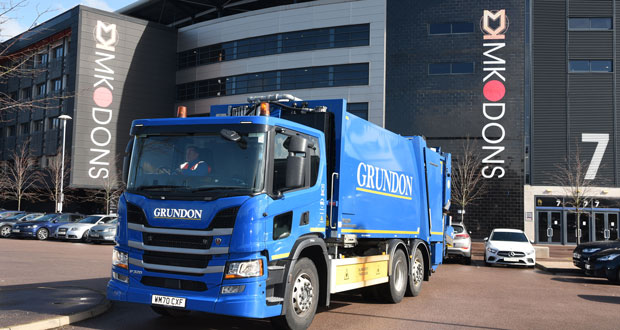 The five -year deal, which is worth in excess of £75,000 per annum, covers waste collections across the stadium itself and the 300+ room hotel which surrounds the stadium; together with the adjacent Marshall Arena, Marco Pierre White Steakhouse Bar & Grill, local radio station and offices.

Grundon has been working alongside the Stadium MK team since 2016 to deliver improved recycling figures, reduce its carbon footprint and ensure 100 per cent compliance with waste regulations.

Changes implemented since the contract began have included the introduction of dedicated food waste and hazardous waste collections, new and larger compactors to reduce the frequency of collections and, most importantly, achieving zero waste to landfill.

Nielsen Stead, Stadium MK Group Operations Director, said: “Grundon has been a great partner to Stadium MK and has provided us with outstanding service levels for all our events and day-to-day waste management.

“We have never been let down by Grundon and it has been a pleasure to see their happy and helpful service team at Stadium MK. With more concerts and events set to return in 2022, including four matches in the UEFA 2022 Women’s Euros, it’s exciting and reassuring to know that the partnership with Grundon will help in sustainably managing the waste of Stadium MK going forward.”

Grundon’s James Standen, who manages the contract, said: “We are delighted to have secured this new contract and are looking forward to working with the Stadium MK team to deliver even greater sustainability improvements in the future.”