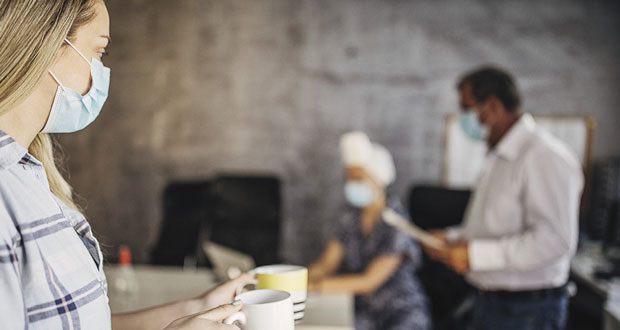 FMJ in conjunction with ZIP Water, the provider of award-winning sustainable drinking water systems brought together a panel of FMs to discuss the provisions FMs are putting in place to make the return to work feel both secure and welcoming

Surveys suggest that some workers are nervous about leaving their homes to return to the office. FMJ and the experts from Zip Water held a round table discussion with a group of senior FMs under Chatham House rules, to discuss how they intend to strike a balance between social distancing and infection control while also providing a sustainable environment that supports wellbeing and engages occupants.

Furnishing the workplace for reoccupation will probably require some major differences from the pre-pandemic environment. For instance, the wider layout of office desking as well as ensuring social distancing in areas of higher footfall such as break out areas and catering will need to be addressed.

How can FMs balance making offices safe for occupation with the creation of a welcoming environment?

Because it’s a natural thing for people to congregate together, despite social distancing rules, a big challenge for FMs is avoiding being, “either the police or a parent”, commented a panellist. This shows the importance of carrying out risk assessments, being firm about the guidelines and clear on the processes that work for your individual environment. FMs also counselled not being “pushed into a position you don’t feel comfortable about from leadership”.

It was also pointed out that: “We’re changing the way people work forever and we need to take staff on that journey with us, whether that is a video tour of what to expect when they come in or an induction half day for people to try the space before they come back.”

One FM is working to pre-empt any concerns with a redesign of reception areas, including the use of S shaped chairs, introducing QR codes for visitors and installing sensors, all touch free, for lifts, washrooms and dispensers.

Dan Johnson of Zip Water has observed this trend amongst many of his clients.

“The overall key message is that the touch free has revolutionised things for them, both from a confidence angle and also because it’s one of the points that doesn’t need to be cleaned regularly. We’re seeing a lot of the FMs pointing out that areas like door handles for the toilets, microwaves, fridge doors, are areas of concern. The worrying point going with that is that if people are worried they won’t use the equipment, so touch free takes away that concern, and it also helps with wellbeing as people can keep themselves hydrated.”

Other issues range from ensuring there is enough bike space for those reluctant to use public transport, to whether there is a decent cup of coffee available in scaled down hospitality areas.

And, as Jason Lee of Zip Water observes, there’s also a mental health element in balancing infection control and health and safety with avoiding creating an alien environment for returning staff.

His view is that while many people can do what is required of them by working from home: “Many others are missing that social contact and the idea of going back to yellow and black hazard tapes may scare people.”

Even when staff return, many may prefer to work from home part of the week, rather than be in the office permanently. How can FMs manage this requirement?

According to a panellist, even prior to the pandemic an in-house survey confirmed that there was typically just 50 per cent occupation within their organisation and they were already moving towards a hybrid model. Lee believes COVID has only helped to “push forward the tech”, with people using apps to book space and enabling FMs to manage space in a much more dynamic way.

It was also suggested if staff are only coming in a few days a week, it’s important to make it the most productive environment as possible. Most of the panel were introducing apps to schedule where staff would be sitting – especially if they needed to be near team mates. The office will be more of a place for engaging with others, than for individual task work, it was suggested: “Most won’t come into the office to sit at their desk for eight hours and check their emails, they can do that from home. They will be in the office to collaborate, see suppliers and clients, so it’s about determining how our offices will reflect this change of use and change of needs. How we can help people to be as productive as they can? How can we manage demand?”

A member of the panel who was half way through an office refurb when COVID hit, had decided to take a “soft landings approach to see how people work and how heavily we need to go with the changes”. They also point out: “There is a bunch of reasons why people might not want to return to the office full time, and it’s not necessarily about the social or wellbeing side, but practical reasons, from younger people who’ve moved back in with their parents to save money to those who’ve enjoyed spending time with a young family.”

All agreed however, that while people will go back into the office, it’s not the same place it was before.

Previous: SPIE takes Gold for the 7th year in a row in the EcoVadis ratings
Next: EMCOR UK sets out its Vision 10 framework