The waste team has also undergone a transformation, not least by being designated ‘recycling and waste’ and with a full-time onsite manager appointed to oversee the sustainability strategy. Innovations include a sink being installed at the stop and search area for people to empty out their water bottle, and there are now water refill stations in the main terminal. There is also a waste team leader, working with (currently) a team of 11 people. Waste streams are managed in an interesting way, with Stansted selling recycling bags to the retail units and then providing the waste lines using the revenue.

The recycling and waste management is still contracted with Grundon Waste Management, which supplies all of the waste away services, including recycling, general waste and technical waste, including the oil cans that come off the site.

Explains Spall: “Our target at the moment is 60 per cent recycling and zero to landfill, and we have a contract manager who is aligned to us from Grundon who helps advise us about our recycling, our auditing and to ensure we’re meeting the waste transfer requirements.” Stansted previously launched an award-winning project to recycle non-perishable food, drink and toiletry items which have to be surrendered by passengers due to hand luggage security restrictions. These are donated to local foodbanks across Uttlesford, Essex and east Hertfordshire. This resulted in an award for Environmental Best Practice at the Green Apple Awards, and the project – which has contributed to supporting more than 3,000 local families to date – is run entirely by the airport staff, who volunteer time to sort and transport donations.

OPPORTUNITY TO INNOVATE
Another advantage of the change, says Spall, is the opportunity it offers to facilities to innovate, without the rigmarole involved in outsourced contracts. “If you’re asking your contractor to trial new solutions it’s taking them outside of their own remit,” she explains. “They haven’t got the flexibility we now have.

“I’m working closely with our project teams to look at innovative products we can use, like swapping out toilet rolls with less wasteful pull-out sheets. We’re also looking at technology-based solutions like flush data going into our toilets that will link to our BMS systems. We’ll also aim to put in scorecards with happy/sad faces, so if, for instance, we get four or five negative comments an alert will go off to the team leader to check out an area.”

Recruitment is also far more straightforward. Unlike the typical model of many outsourced contractors for soft services which go through agencies, and tend to result in more temporary and less engaged staff, Stansted Airport has a different approach. It now recruits directly, which gives them a much more positive response rate.

Stansted’s Team Promise is now preparing for the frenetic summer period. From the beginning of June, the new managers have four weeks to completely embed, get their teams aligned, do the real work on team culture and change of behaviour, and move that forward so that when 1 July comes, they’re ready.

Given some of the mess people create at airports (the fact that people routinely drop chewing gum onto the floor at passport control was a revelation), Spall recognises that she wants to motivate a team who are passionate to deliver but, given the environment, also be ready to let things go – especially when, just after giving an area a good clean, it’s messed up in minutes. The frustration this can create is appreciated, but as Spall points out: “You can’t change others’ behaviours, but you can try and influence them by putting signs up to encourage more considerate behaviour.”

For now, the facilities team is confident that the changes will improve the customer experience at the airport. In fact, according to Roy Elphick, Asset Maintenance Services Director at Stansted: “I think it already has, compared to where we were 12 months ago. And we’ve not got different people, just the same people, but with much improved motivation.”

Insourcing your soft services isn’t an easy process, Spall acknowledges, but if there is enough commitment throughout the organisation it can be worth the effort. One of the biggest provisos, she advises, is to get all of the management on board.

“Be crystal clear about your strategy, about the outputs you want, where you come from, where you want to get to, and most of all, believe in it to make it a better place to work. We’ve got the passion, and we did it in a very short time period, but I do believe that if that had gone on for longer, there wouldn’t be that much more benefit. And remember, you can’t change everything overnight, so you’ve got to be clear about what your measurements are on what you can and can’t do.” Roy Elphick adds: “The other point for me is to be very focused on what exactly you want to deliver. With outsourced contracts it’s very easy to go for a cut price and then think about the standards, but with this we’ve thought long and hard about what outputs we want, the team that we want to deliver it, and then what it’s going to cost us. We can’t criticise the outsourced providers because they delivered what we bought, but what we bought wasn’t what we wanted.”

Previously, according to Spall, “the cleaners were crying out to be part of the family and not an outsourced team. Now they’re part of the Stansted team and feel like they’re treated with the same respect.

“We’ve got everyone back on board with a leadership team who are there to lead and a management team there to manage. It’s all about support and inclusion and being recognised for doing a good job. You can put as many people as you like onto this terminal, and say ‘go clean’, but unless they’re motivated they will do the minimum. However, once they can see the bigger picture, it changes everything.” 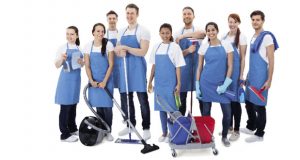