Tributes from across the sector have poured in for Founder and Co-director of De-ice, Mark Lopez who sadly passed away on 2 April 2020 at the age of 59, after losing his battle to Covid-19.

Mark’s contributions to both the winter gritting and facilities management were vast. His passion for his work, was greatly admired and he was a true friend to many as reflected in the tributes below:

“I was saddened when I heard the very sad news that Mark has passed away. “I had the pleasure of being introduced to him by Charlie Oakley at UBM where he was a customer at the Facilities Show. He was always firm but fair in business and he knew exactly what he wanted. Over time I was also lucky enough to get to know him away from work – in particular on the golf course – where he was a true gentleman on and off the course.

“He will, I know, be missed by all those that were fortunate enough to meet him and get to know him and my thoughts are with his family at what must be a very difficult time. I hope you all take some comfort in knowing how well regarded he was by all of us at UBM and we will be thinking of you all.”

“I was really saddened to hear the news of Mark’s passing. Over the last 10 years I’ve got to know Mark through meeting him at the Facilities Show and other industry events.

“I will always remember Mark as a kind, fun and friendly gentleman with a terrific sense of humour. “My thoughts and heartfelt condolences are with Mark’s wife Vicky and her family, friends and colleagues at this moment.

“Mark will be deeply missed and I’ll certainly be raising a glass to him at Facilities Show for years to come.”

“Mark was one of a kind. A true gentlemen who always had a smile on his face, he would bring people together and was extremely generous with everything especially his time for others.

“Mark will be a big loss to the FM industry and I would like to pass on my deepest condolences to Mark’s family at this extremely sad time.”

“I first met Mark on the golf course at a SHE Golf event a number of years ago. Golf was a passion we shared and many hours were spent on the course together at Mark’s home course in Essex as well as my own in Suffolk. Mark was such a warm character who I could sit and talk for hours about golf, work and many other aspects of our family life, which I know he was devoted.

“When we attended the SHE show my first action on day one was always to walk over to Mark’s stand to say hello and arrange a social catch up and plan our diary of summer golf. One year Mark invited me to join his team in a Pro/Am competition at his home course. What Mark failed to tell me was that this was a serious tournament with actual prize money for the attending Pros, of which there was one in every team. Just as Simon Mills and I were due to make our way to the tee Mark informed us with a cheeky smile that there were dozens of spectators and there was even the pressure of being professionally announced onto the tee. Mark stepped up to be the first to go and took the pressure off us all by showing us the way.

“There will be a very sorely missed empty chair at every SHE golf event from now on and they will never be the same without him. I will cherish the memories I have of playing golf with Mark and he will never be forgotten.”

“I first met Mark in 2011 when De-Ice became an exhibitor at the Facilities Show, at the time I didn’t know just what a good friend he was going to be.

“When writing this piece, I started to note down all of the memorable times that we shared together, the page filled up quickly as did my eyes with tears, initially tears of sadness shifting to tears of happiness as I played out those memories in my head. I am sure many of you reading this will have also been doing the same over the past few weeks. “I remember one sunny Spring evening in Birmingham, the last time Facilities Show was held at the NEC. Mark was blaming me for holding the event at the same time as the Europa League final and to make up for ‘my’ fault I should find a good bar to watch the game with him on the Wednesday night. So whilst everyone else had a good time at the exhibitor party I was walking around looking for a bar to show the game! The game was great, Chelsea won, obviously and Mark and I were dancing on the tables together that evening!

“His love for football and our shared passion for Chelsea brought together a fantastic collaboration in 2014 at London ExCeL. Mark and I, mainly Mark, thought it would be a great idea to build a stadium within Facilities Show that would play the World Cup 2014 games and host other networking opportunities. Again, it was my fault for putting the show on at the same time as such an important date in the football calendar! Mark as he always did, wanted to share his passion with as many people as possible in an industry that he held so dear to his heart.

“The other passion in Mark’s life outside of the 3 F’s (Family, Friends, Football, I think in that order) was the game of golf. He took the game very seriously and shared many a good moment on the golf course with so many of us. One memory sticks out for me, Mark had wanted to play Walton Heath for many years and so when we managed to organise a game there, he was super excited! The day came and the heavens opened up. Mark didn’t particularly enjoy a game of golf in the rain and by the 6th he wanted to walk in. We ploughed on through and the sky brightened up, pretty sure he played the back nine to +4 which made him happy.

“Mark always dressed so well, he always had the best clobber, smart and ready to do business! I was so happy to show him my new Loake brogues, only to then fell like an idiot as I had added a rubber sole protector onto them.

“You might as well had not bothered, if you buy a quality brogue the whole point is that you are walking on a quality leather sole. You just re-sole them!”

“Those words have stuck with me ever since, I always now re-sole my brogues, never rubber.

“Mark will be missed by all that knew him, one of life’s good guys, he left an impression on everyone he met and in these difficult and emotional times he can still bring a smile to your face remembering those moments we shared.

“Keep the blue flag flying high up there mate!”

“I like many others had got to know Mark through meeting him at the Facilities Show and other industry events.

“My abiding memory of Mark will be someone who always had a smile and a joke ready to brighten up your day, however bad that day was and on the golf course it was generally a bad day for me!

“Although our paths never directly crossed in business and more through industry events, it was clear to see that his knowledge and enthusiasm of the industry we serve and more importantly his willingness to help and share his experiences with others, marked him out as a special person.

“Mark will be sorely missed by all who knew him and my deepest condolences to his family, friends and colleagues in this difficult time.”

“I started working with Mark and Vicky around six years ago, and I can say with my hand on my heart they have always been amongst my most cherished clients. Mark was sceptical about the value of PR when we started, but we soon got into the swing of things and before long he was leading the charge with his creativity. This was something he had in abundance; he was forever coming up with great ideas and ways of progressing the business.

“What I liked most about Mark though was the pride he took in all he did. He was such an honest and decent man, and continually tried to do his best by everyone – his family, his colleagues and his clients. He has been taken from us too soon, but we all stand behind Vicky and her family – now and moving forward.”

“I first worked with Mark (and Vicky) after a chance meeting at the FM show, we partnered together to work on quite an ambitious project for both of our organisations, and through this project I got to know Mark well, joining him in the hotel bar on his many trips up to the Midlands as we continued to work together. This project was a challenging one and it is in those challenging circumstances you get to know much more about people than you do when its plain sailing and Mark was by side throughout, never shirked from any of the challenges and approached everything we did with honesty and enthusiasm.

“I then moved on to pastures new but had made a friend in Mark that went beyond a business relationship, we kept in touch, caught up for a meal or drink and always picked up the phone after a Newcastle vs Chelsea game, one of us to gloat. Although I have to admit the Monday after a Newcastle vs Chelsea game it was usually Mark ringing me rather than the other way around. Mark was someone who I could pick up the phone to talk football, life, food, drink and occasionally gritting services & FM, he was a diligent professional and above all else a gentleman and friend who will be sorely missed.”

Mark sadly leaves behind his wife Vicky with whom he established De-ice gritting & Snow clearance – one of the UK’s longest established winter risk management providers and his five children, Dean, Ryan, Paige, Isobella and Reece. Mark and his wife Vicky A memorial will be arranged and announced for Mark once the current restrictions are lifted.

Previous: Safe ground
Next: Flotex at its natural best 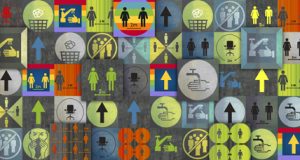 Social distancing in style: A creative approach to flooring design for the changed workplace 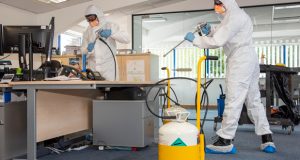