Alex Emms, Operations Director at Kohler Uninterruptible Power, looks at the importance of Power Usage Effectiveness to data centres, and how UPS efficiency can contribute to improving it 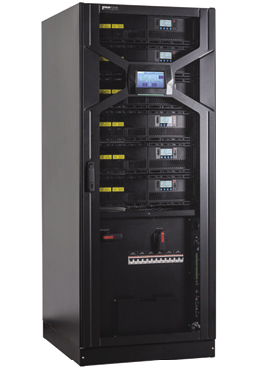 According to an article published in Science magazine , global data centre computing capacity more than quintupled between 2010 and 2018. However, data centre energy consumption grew by only about six per cent during that period, thanks to improvements in energy efficiency.

This perhaps surprising and relatively low rate of energy consumption growth reflects the ongoing shift of computing from old, inefficient data centres operated by traditional enterprises, such as banks, insurance companies, or retailers, to newer facilities built by providers of cloud computing services, such as Amazon Web Services, Microsoft Azure, and Google Cloud.

The PUE metric was introduced as a global standard in 2016 under ISO/IEC 30134-2:2016 by the Green Grid, which is an open industry consortium of information and communications technology industry stakeholders that works to improve IT and data centre efficiency and eco-design around the world.

The metric is calculated by the formula:

From this, we can see that ideally PUE would be 1.0, meaning that all of the data centre’s energy input is usefully powering its IT equipment. In real life, this is impossible to achieve as some energy is always needed by cooling, lighting, power distribution, power conversion and UPSs, and possibly other services. Nevertheless, it is a target worth aspiring to – and any PUE improvement strategy should include an investigation of the facility UPS installation’s energy efficiency and ways it could be improved.

Note that while PUE is a useful way of calculating energy efficiency, individual circumstances should be taken into consideration. Consider, for example, two identical data centres, where one is located in Miami and the other in Alaska. While they may have the same intrinsic efficiency, the Miami site may return a higher PUE value because it must expend more energy on cooling.

IMPROVING UPS EFFICIENCY
Several factors contribute to overall UPS energy efficiency; the first relates to the system’s electrical design. Nearly all data centre UPSs sold today, and most systems already installed, employ transformerless technology. However, some facilities may have legacy UPSs, with earlier transformer-based designs, remaining in operation. Apart from considerations relating to reliability, flexibility, and footprint of older equipment, these may be worth replacing for efficiency reasons; eliminating the transformer significantly impacts UPS efficiency, increasing it by around five per cent to yield a substantial reduction in heat loss and energy running costs.

Data centre operators can also benefit from modern UPS topology by choosing a modular solution. KUP’s PowerWAVE 9250DPA system, for example, can accept from one to five 50kW modules, plus one for redundancy, within one frame for vertical scalability. Horizontal scalability is also possible, where up to five frames can be paralleled for capacities up to 1.5MW.

While this scalability is great for capital cost control – no need to buy more capacity than currently required as it can so easily be added later – it also has implications for energy efficiency. Because the modular UPS can always be ‘rightsized’ to the load, each module can be kept adequately loaded. This is important because, while modern UPS systems exhibit a near-flat efficiency curve for most of their load spectrum, efficiency tends to diminish significantly if loads drop below 25 per cent.

Overall, if rightsizing is used to keep UPS loading between 25 per cent and 75 per cent, the PowerWAVE 9250DPA, with IGBT converters that include three-level topology and interleaving controls, can achieve efficiencies of up to 97.6 per cent.

XTRA VFI SMART MODULE SWITCHING
Modern UPS systems can be designed to maintain their efficiency through short-term variations in load levels as well as longer-term trends. The PowerWAVE 9250DPA achieves this with a mode called Xtra VFI. With this smart mode enabled, the UPS automatically adjusts the number of active modules to meet current load requirements. Any excess modules are switched to standby but remain ready to transfer to active mode immediately if the load increases. Accordingly, each module’s load can be kept above 25 per cent, so optimum efficiency is maintained under all load conditions.

In calculating the optimum module count and loading level for maximum efficiency, the system can allow for desired redundancy levels. Both the redundancy level for active capacity and the highest expected load step can be user-configured to guarantee the best protection level.

If an electrical mains failure or alarm condition occurs, the Xtra VFI mode is automatically deactivated; in this situation, all modules are switched to ‘active’ status. 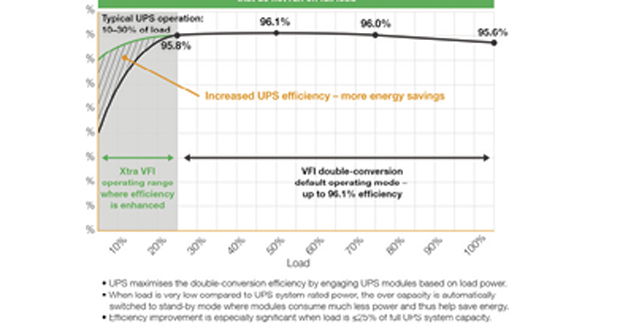 ECO-MODE
Eco-mode is similar to offline UPS operation and is the most energy-efficient operating mode for a UPS.

In this mode, power flows directly from the utility mains supply to the load during normal operation, so bypassing the rectifier and inverter inefficiencies. If a mains problem is detected, the critical load is switched to the inverter output.

While eco-mode efficiency can reach 99 per cent or more, it exposes the load to any incoming mains problems during normal operation. Additionally, it relies on the load’s IT equipment power supplies having sufficient capacitance to ‘ride through’ the switch between mains and inverter, and vice versa, and prevent the UPS supplying a transient inrush current to restore lost energy after an outage. Otherwise, line impedance between the UPS and the load may cause this current to create a significant input voltage drop.

Accordingly, users should weigh the benefits of increased UPS operating efficiency against the load exposure imposed by operating in eco-mode.

CONCLUSION
UPSs are large-scale items of electrical equipment within data centres. Accordingly, any efficiency improvement that can be achieved with the techniques mentioned can contribute significantly to a data centre’s PUE rating.

Previous: Elior UK in five-year catering partnership with Scottish Arts Centre
Next: Just a third of UK workers want to return to the office full time 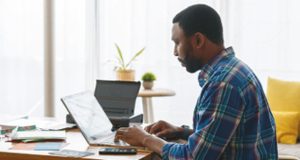