The traditional office scene – rows of large filing cabinets crammed with reams of paper – is dying out, and so are offices manned by people sitting at fixed workstations, complete with desk pedestals filled with detritus. Advances in technology mean agile working has come into vogue over recent years as people are able to work anywhere, anytime, and are no longer chained to a desk. But even a dynamic, agile workspace still requires some kind of personal storage for individuals as well as ways of keeping essential and confidential documents safe.

According to commercial interiors specialist Beth Harrison of Sketch Studios, agile working might have persuaded people to work remotely but employers still need to create a welcoming workplace culture. Employers want to find ways to attract staff away from the coffee shop and back into the office. Ensuring people have somewhere to store their stuff is part of this – although the type of storage required is changing. “With the use of hotdesking and technology, people aren’t keeping the same paperwork,” says Harrison. “Some teams, such as finance and legal, may still need to store confidential documents, but sales, design and marketing teams may no longer have as much paperwork, which means filing cabinets are no longer fundamental pieces of office equipment.

“Storage has changed from an allocated one-and-a-half linear metres of filing regardless of job role to HR or finance having double that. The way we archive records has changed too, with paperwork now scanned and stored – you don’t get deterioration on the quality of the paperwork, and you aren’t charged huge amounts for the storage space when it’s in an electronic archive. And with people working on the cloud, the days of printing out piles of documents have gone.”

The impact of that for the typical office is that you no longer need towers and towers of storage cabinets, and anyone who still has a pedestal-type desk will tend to keep only rubbish inside it. This is where personal lockers come in – and these too have evolved over time.

PERSONAL SPACE
While we are storing less paper, human nature will always ensure that employees want a space they can call their own. Research carried out by storage company Bisley for its ‘Belong at Work’ panel in December 2015 found that nomadic workers need to be well looked after; they must know where to put their coat and bag, where to charge their phone and so on. It concluded that employers who help people feel quickly at home in an office foster a sense of belonging within that organisation. Says Helen Owen, Bisley’s Director of Business Development: “Lockers are a simple, effective and efficient way to provide this, but rather than being a ‘dumb box’, lockers have become far more sophisticated and are the perfect storage solution for agile, dynamic workplaces, as well as supporting the co-working phenomenon.”

According to experts at KI, when the post-millennium upsurge in personal storage began, it manifested itself in simple locker solutions with keys. Very quickly FMs were faced with a new headache as keys were lost or broken, which became a cost and distraction. In the case of one large bank, the cost of replacing missing keys ran into six figures within the first year.

This rapidly led to the popularity of three- or four-digit combination locks, then demand for RFID (radio-frequency identification) access to personal storage. RFID locks are now more affordable than they used to be and provide an integrated card access solution, covering everything from the front door to lift access, vending and personal storage. This has enabled the introduction of more advanced features such as audits of locker usage, giving FMs and building managers the ability to manage multiple RFID locks remotely via a wireless hub. More recently, USB charging points and even internal lighting are being offered within these personal storage systems. Says Owen: “Essentially lockers are made ‘live’, with USB power available to charge your personal items such as iPods and mobile phones. This means it’s possible to take a laptop away to work at a desk, only to be charged again when it goes back in the locker overnight, kept safely away behind a simple barrel lock, digital combination lock or RFID lock.”

Reflecting their more personal appeal, these new types of storage furniture are designed to fulfil differing requirements. For instance, those found in bike or gym-changing areas offer enough space to hang a jacket, rails for clothes, and even dedicated underspace for shoes. Says Harrison: “We’re seeing everything from large lockers to those you might find in a call centre where they are not allowed their own mobiles, so they might have a tiny locker for a wallet and phone, complete with charger.”

There is continuing demand for a generic standard size of locker, however, to maximise storage flexibility, with ‘large enough to fit a crash helmet’ still a well-used rule of thumb. “We cater for many different types of storage and stowage,” says Owen, “from the smaller 380mm size to 760mm-high lockers that accommodate larger items such as cabin bags.” Agile workers will carry a minimum of a backpack and/or a laptop bag, she points out, and solutions need to reflect that.

VISUAL INTEREST
The traditional filing cabinet has often been utilised as a way of breaking up the space in an open-plan office, and that approach is still the norm even where workplaces have introduced new ways of working. According to KI, good storage systems provide internal landscaping and interior architecture, and are therefore a key component at the heart of the working area. This needs to be considered when planning a work environment. Storage lockers are becoming objects of visual interest with the introduction of different door materials and colours, and the emerging trend for vinyl artwork across multiple runs of lockers.

Owen agrees. “Well-planned configurations of lockers can be used to divide spaces, and the addition of decorative tops means they can double as touch-down points for impromptu meetings,” she says. “Lockers are also ideal placed inside or outside meeting rooms to safely store people’s stuff.” The greatest wrench for individuals in this new way of working is giving up their traditional pedestal. Says Harrison: “In terms of consulting on an office move, when it comes to storage we’ll ask people to dispose of as much as they can before we even look at what they’ll need in terms of storage in their new workspace.” A lot of people still want to have a pedestal, as they want their stuff by their side even when they’re not there a lot of the time. It’s important to them, “even if they’re only storing personal effects such as spare shoes or tea bags.”

FMs often find that the greatest objection to losing the pedestal is that the new storage lockers may require them to walk back and forth from their working area – fixed desk or otherwise – to retrieve their stuff. This is where cardboard containers or caddies that go inside the locker are a boon. Hotbox sells a range of caddies that enable locker users to move freely around the office. They’re equipped with a handy carry case and are designed to allow people to organise their personal items, work tools and paperwork. Bisley also produces mobile caddies and pedestals that include a perch cushion suited to collaboration at the desk. Even the most agile of workplaces still require some form of secure office storage. KI says there’s a strong design trend in storage towards very open, modular flexible steel or wood-framed systems which have a domestic influence. Typically, these provide either open shelving or some lockable personal storage options. The more traditional systems for storing documents still prevail, however – predominantly the classic lateral drawer or cupboard styles, mainly in steel, but also in MFC.

Variants of these classic designs in mixed materials are softening their appearance and allowing them to blend into contemporary environments. This is essential for those who may be out of the office for long periods. Storage, in this respect, can act as a sort of anchor for when they are back in the office – especially since they may not have a dedicated desk. Personalising the space is universally beneficial for all workers.

Harrison points out that lockers can play a more significant role within the business. “If you’re using a lot of locker runs, you could use them to encourage people to interact. Make them centralised to get people to move around, and help deliver a truly agile workplace.” 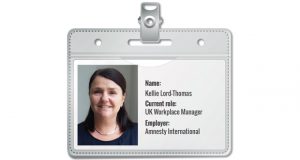