This is the year we need to truly start to deliver zero carbon buildings as making buildings slightly less bad is just not good enough anymore. We need a step change if we are to try to keep global warming below the Paris target of 2°C, and an even bigger step to achieve the aspirational target of 1.5°C.

This step change isn’t simply carrying on as before then buying cheap international carbon credits from, for example, tree planting to offset Greenhouse Gas (GHG) emissions from coal power stations. This is not creating additional renewable energy for the grid; it’s not doing anything to wean us off our over reliance on coal for power; and it does not reduce pollution due to the extraction and combustion of fossil fuels.

Back in 2012 Cundall worked with Bioregional to set a target for our business to have zero carbon energy by 2025. This was a core part of our endorsement as the world’s first consultancy to become a One Planet company. This specifically excluded us from offsetting our carbon cheaply and quickly each year by buying carbon credits, which are now available from as little as a dollar a tonne. At the time, we recognised that the path to achieving zero carbon energy would be difficult and, in truth, it is still an issue we are grappling with today.

One of the principal reasons for the difficulty is that we are tenants in our 20+ multi-tenanted global office buildings. To calculate our carbon footprint we take into account both our tenant and our proportion of landlord energy consumption and each come with their own set of hurdles to achieving zero carbon energy.

RENEWABLE ENERGY
As a tenant, we would ideally like to use renewable energy to keep our lights on and our IT systems running. On-site renewables are not practicable in our various urban locations (and we don’t own the buildings), so we need to utilise off-site renewable power. In our Australian offices it’s fairly straightforward – we purchase, at a cost premium, accredited green power through a Government-regulated scheme. However, that’s not an option for our other offices around the world.

One idea we’ve considered is owning our own renewable energy system – for instance, a wind turbine that produces enough electricity to offset our energy consumption globally. We haven’t worked out a practical mechanism to do this yet. In Australia, where there’s plenty of land outside of the cities for large-scale renewable energy including wind and solar, power-purchase agreements (PPA) are becoming increasingly popular whereby businesses do not actually own the solar farm, but enter into a contract with the owner to purchase power from that farm which is distributed to the property via the national electricity grid. Unfortunately, this arrangement is not available globally and we are not a large enough energy consumer to be commercially attractive to negotiate PPAs with energy suppliers.

We are considering buying carbon offsets as a stop-gap between 2017 and 2020, but only offsets that are directly related to a new renewable-energy project such as a solar farm, to align with the zero-carbon energy intent. It’s not quite the same as tree-planting offsets which are ostensibly about buying a carbon product – investing in renewable energy system based credits will at least assist in reducing reliance on fossil fuels for power. However, understanding which energy projects are more credible than others is a key issue we will need to investigate further.

Yet even when we resolve our tenant energy, we still have to take into account the landlord energy which is typically 35 per cent of our global office energy footprint. We have very little influence in whether our landlord purchases ‘green power’ so how do we make it ‘zero carbon’? As a start, it would be useful to make landlord energy consumption more visible to tenants so that we can have a conversation with property owners and managers about reducing energy and green purchasing options. In our experience, they’re very quick at sending us the bill for energy consumption, but not so proactive at telling us the actual energy consumption (in kWh) we’re being charged for. In Australia we have a national rating system called NABERS that measures the energy and carbon performance of offices. It does so by using measured and verified performance information, such as utility bills, and converting them into an easy to understand star rating scale from one to six stars. The scheme has proved to be quite transformative because many landlords have to display their NABERS Energy rating by law and, if it’s only one or two stars, tenants know they’re in a poorly performing and inefficient building. This encourages property owners to take steps to get better ratings and build their reputation to attract tenants. Green power can be used to improve the ratings but the rating with and without this benefit is clearly stated.

RAISING THE BAR
Sadly, schemes such as NABERS are rarely available for commercial property in other parts of the world, despite a lot of people pushing and nudging their respective Governments to do so. But a nudge is sometimes needed to break from conservative thinking, and leaders in the property sector have a role to play by showing what it is possible to achieve voluntarily. We need to raise the bar significantly in both energy transparency and performance.

Buildings, as both energy consumers and generators, have a key role to play in the energy and carbon revolution. The purchasing power of the property sector can clearly be a major catalyst to a low carbon future.

We still have some way to go before we can truly achieve zero carbon energy in buildings. In the meantime, we continue to seek for ways that tenants such as ourselves can achieve our goals and make it possible for others to do likewise. 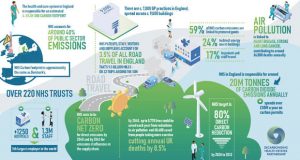