Stefano Bensi, General Manager EMEA at SoftBank Robotics, a world leader in humanoid robotics, explains the results of a recent study to establish the effects of vacuuming on airborne particulates

Recently, built environment groups such as the British Council for Offices and the Royal Academy of Engineering have urged for better ventilation in Britain’s buildings to reduce the risk of COVID-19 and other infections. Yet ventilation and its role in spreading airborne particulate matter are the tip of the iceberg when it comes to indoor air quality.

Cleaning products such as air fresheners and cleaning solvents often produce aerosols capable of irritating the respiratory system. Paint contains volatile organic compounds (VOCs) that can lead to breathing difficulties and damage our body’s central nervous system. Harmful mould lurks in damp corners of bathrooms and other poorly ventilated spaces. Dust builds on surfaces without an adequate cleaning regime in place. Even a building’s heating, cooling and humidification systems may introduce pollutants into the air if they’re not properly maintained.

As outlined in the feature on page 48, these factors can literally make building occupants sick, a phenomenon officially recognised by many global health organisations as ‘sick building syndrome’ (SBS). Common symptoms from SBS include headaches, skin irritation, dry coughs, fatigue and more.

For more than a decade Leesman has been measuring employee experience globally. Its data from more than 900,000 employee surveys show 67 per cent of respondents have reported that air quality is important to them. Yet fewer than half (46 per cent) were satisfied with the air quality in their office. That represents a huge disparity between what employees expect and what their organisations are delivering.

Further research suggests that these employees have every right to be dissatisfied. Recently, Harvard University’s public health school undertook a study to determine how air quality impacted people’s productivity. Researchers worked with more than 300 individuals for over a year, using an app to trigger personalised cognitive tests at specific times and when sensors detected a depletion in air quality. This study – which included participants in offices across six countries 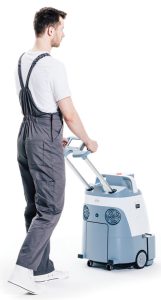 Cleaning practices can make a huge difference to the spread of airborne particulates. Surfaces such as carpets serve as an important air filter by trapping pollutants, but their effectiveness reduces as they become saturated with dust and debris, so their cleanliness is crucial.

With that in mind, as well as the growing demand for solutions that support better air quality, we wanted to see how our autonomous vacuum sweeper Whiz would deal with the challenge of airborne particulates settling on floor surfaces. Whiz is a collaborative robot – or ‘cobot’ for short – designed to support cleaning teams in their work by removing the strain of repetitive and time-consuming tasks and enabling staff to focus on higher value activities. The cobot comes equipped with a sweeping brush, a filter that captures particles such as dust and pollen, and built-in sensors that allow the cobot to avoid people, walls, stairs and cliffs. The technology can also send real-time alerts when it’s done or needs assistance.

So, we set up a study with smart sensor provider Infogrid whose platform can handle millions of real-time data events from hundreds of thousands of sensors. For this project, we deployed dozens of air quality sensors with the ability to monitor CO2, VOCs, radon, humidity, light levels, ventilation, virus risk factor, air pressure, and a range of pollutants including particulate matter – the latter being the study’s primary focus.

We chose two unrelated test sites: a corporate bank headquarters and a corporate office environment. Then, we deployed Infogrid’s air quality sensors in these buildings and took readings for two weeks while cleaning teams continued to service the areas according to their normal cleaning schedules and using their normal cleaning equipment. The sensors were installed in various positions across each floor, all chosen for their medium traffic. Next, we deployed Whiz for a two-week period while suspending normal vacuum cleaning practices and continued to measure air quality through the Infogrid 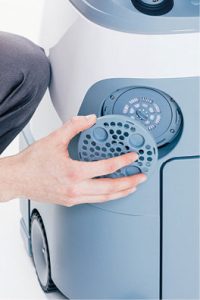 The study measured and compared approximately 400,000 data points over the four weeks, analysing particulates at three different sizes before and after Whiz’s deployment. And our findings were emphatic. The data uncovered a positive reduction following the introduction of our ‘cobot’ technology, with supermajority in the 50 per cent reduction range. Meanwhile, the study detected no increases in particulate through the operation of Whiz.

These results demonstrate the benefits that data-driven technology can deliver for organisations now pursuing better air quality in their buildings. As always, measuring data provides a clear baseline for improvements and the evidence needed to justify longer-term investments down the line. Nonetheless, it’s important to remember this objective requires a holistic approach which targets the numerous factors impacting air quality, from ventilation and HVAC systems to the use of non-toxic cleaning products, air purifiers and other disinfection tools.

Previous: Optimism remains in the workplace and facilities management sector despite challenges and uncertainty
Next: BM hires new nutritionist 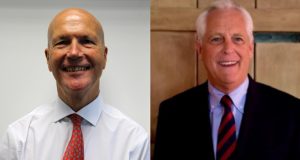