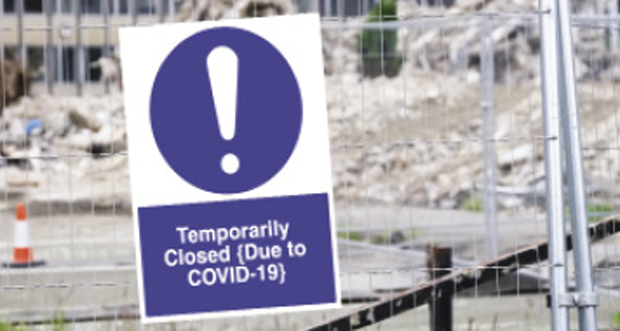 At the beginning of July the Government published updated guidance on the ‘flexible furlough’ arrangements that will apply under the Coronavirus Job Retention Scheme (JRS). Alan Lewis, a Partner at Constantine Law updates FMs on the legal issues you now need to be aware of when implementing furloughing measures

“Ponder and deliberate before you make a move,” said Sun Tzu in “The Art of War”. That ancient Chinese warrior’s words are still hugely relevant today. Businesses have been fighting a war for over three months against the hidden enemy that is COVID-19. And the Government has supported businesses in the FM sector and elsewhere to the tune of billons with its Coronavirus Job Retention Scheme which has funded the wages of more than 8.9 million workers in the UK.

Within FM there has been a reduced level of activity for service companies across many customer sites with a decline in project work. Because of what was effectively a shutdown of the hospitality, leisure and retail markets and the requirements for non-key workers to work from home, most workplaces became dormant. This has meant that customers UK-wide have sought to suspend contracts and preserve cash balances.

According to ONS reports for 31 May 2020, in the accommodation and food service sectors furloughing rates ranged from almost two-thirds (64.1 per cent) of employees where businesses were currently trading to four-firths (80.4 per cent) for combined figures for businesses that were continuing to trade or had temporarily closed or paused trading. In construction the rates were 33 per cent and 36.5 per cent respectively and across all industries 20.8 per cent and 29.8 per cent respectively.

Now the Scheme is to be wound down and will eventually disappear completely at the end of October. So, when pondering and deliberating their next move, what should FM companies be doing to prepare for the transition from furlough to no furlough?

FLEXIBLE FURLOUGH
For the last three months or so employers have been able to benefit from a subsidy under the Scheme taking care of 80 per cent of the salary costs of their furloughed employees to a maximum of £2,500 per month per employee. The scheme is now transitioning across the four months of July to October.

1 July 2020 saw the introduction of the ability to bring workers back from furlough on a part-time basis (flexible furlough). From 1 August 2020 employers will still be able a claim the 80 per cent subsidy but will have to take care of employee National Insurance and pension costs. From 1 September 2020 that subsidy reduces to 70 per cent and is lowered again to 60 per cent from 1 October 2020. The Scheme ends on 31 October 2020.

The important point to note is that when the subsidy reduces to 70 per cent and 60 per cent, the employer must still top up to the 80 per cent level in order to be able to claim the subsidy.

FURLOUGH RULES
So how does flexible furlough leave work? In order to return part-time and still be eligible for the subsidy when on furlough, an employee must have been furloughed for at least 21 calendar days at some point beginning on or before 10 June 2020 (subject to exceptions for employees returning from maternity leave or parental leave). Employers will have to keep a new written agreement that records the flexible furlough arrangement. The latest Treasury Direction from the Chancellor to HMRC (issued on 25 June 2020) confirms that this can be by means of a collective agreement made between the employer and a trade union). These can be tricky to draft as they will impact upon the employee’s contractual terms of employment and employers will be wise to seek advice.

These agreements (including a collective agreement) must be made before the beginning of the period to which the claim for subsidy under the Scheme relates and must be in writing or confirmed in writing by the employer (email is fine). FM employers should note that they must retain the agreement (or the confirmation of the agreement) until at least the end of June 2025.

The flexible furlough can last for any amount of time but the minimum period that the employer can claim for is seven days. The amount that can be claimed is calculated proportionately to the hours worked by the employee during flexible furlough. This means that it is vital to keep accurate records of hours worked and hours spent on furlough to able to claim. A practical step is for employers to have accurate time recording arrangements in place, as details of these hours will have to be produced when making a claim for subsidy.

Just returning to those words of Sun Tzu, FM companies would be well advised to ponder and deliberate as to how they will apply furlough and part-furlough, keep records of hours worked and hours spent on furlough and the making of claim for subsidy.