Newcastle University’s Urban Sciences Building is a feat of engineering. Not only is it an exemplar of sustainable construction and energy efficiency, it is also a ‘living laboratory’ – a building designed to enable continuous research and learning in the field of energy management.

Located in Newcastle’s new Helix quarter, a city centre development fast becoming renowned as a global centre for innovation, the 12,800 sq m Urban Sciences Building (USB) houses the university’s School of Computing alongside a series of innovative labs focused on research into the urban environment. Opened in 2017, it has set a new benchmark for campus design, achieving a balance of sustainability, space flexibility and operational efficiency.

DESIGNING FOR PERFORMANCE
From the outset of the project, the operational efficiency of the building was key. It has become all too common for buildings to be designed and constructed in a way that makes them compliant with the relevant regulations – as they should be – but with little thought for how they will actually behave once occupied. As a result, it is normal for energy consumption to be around 2.5 times higher than originally modelled. For our team, however, closing this ‘performance gap’ was a critical objective.

During the early design stages of the project, we developed a series of bespoke sustainability targets for the contractor design team, Bowmer & Kirkland and NG Bailey, to take forward. One target was to carry out operational energy modelling, using detailed calculations to predict the actual energy usage. We reviewed these calculations after the first 12 months of occupation and found that the building was performing within three per cent of the predictions. Quite an improvement on the 250 per cent industry average.

This focus on the operational performance of the building was also supported by the university’s adoption of the BSRIA Soft Landings process. The objective of Soft Landings is to bridge that gap between good design intent and actual performance by encouraging design teams and their clients to continue to work together once construction has been completed. What’s good about Soft Landings is that it isn’t just focused on snagging or finding defects but on raising awareness of design intent from the earliest stages of the project, as well as fine-tuning and increasing understanding of how energy and environmental performance can be improved in use – it could be described as professional aftercare.

For the first year after the USB was handed over to the university, there were monthly Soft Landings meetings with the estates team to review, analyse and make tweaks to improve how the building was performing. Taking this positive, collaborative approach has enabled us all to not only focus on the continued energy management of the USB, but also to learn valuable lessons that we can apply to future projects.

CREATING A DIGITAL TWIN
Newcastle University is known for its pioneering spirit. With innovation a core element of our brief for the USB, a number of PhD researchers have their hands on the data from the building and are already creating some fascinating outputs we believe are a first in facilities management.

There are over 4,000 digital sensors installed throughout the building to constantly monitor environmental conditions and energy usage. Through a collaboration between the university’s estates team and PhD researchers with support from the project team, a 3D digital twin of the entire building has been created. This enables us to feed data from the thousands of sensors to what is effectively a BIM visualisation model in real time.

Using this digital twin, building managers can focus in on a specific room, floor or area of the building and look at how systems such as heating and cooling are performing to within seconds of reality. So if someone complains that an environment is too hot, they can instantly review whether the temperature in that space has in fact increased and adjust it accordingly, or whether they just need to take off their jumper.

Importantly, the digital twin also helps the university’s researchers forecast how the building will behave in different scenarios. In turn, they can use this information to evaluate its potential to provide rapid demand response when the national electricity grid comes under strain through the removal of the smaller, non-critical energy loads of individual buildings. Although this kind of scenario testing has been done on a mass scale for very large energy consumers, it has never before been tested with a single building – another first for the USB. This theme of innovation and research has also been applied to the very fabric of the building. Knowing that the USB would provide a home for the university’s urban environment researchers, the estates team were keen to understand if and how the building could support these academics in their future work – could the building itself become a laboratory? The answer, of course, was yes – and the living laboratory concept was born.

Through extensive engagement with the researchers, together with Hawkins\Brown Architects, we embedded and enabled a host of technologies within the building into the design concept, which directly support the university’s ongoing academic work. To give just a few examples: sensors in concrete floor slabs measure the temperatures to enable monitoring of the thermal mass and associated night-time purging; the soil moisture levels of the building’s green roof are constantly monitored; supercharging points for electric vehicles are linked to a microgrid within the building, and solar photovoltaic-thermal (PV-T) panels generate renewable electricity and heat.

In another first, the building also houses a unique energy storage test bed, connecting multiple battery and super-capacitor packs to the main grid, which also feeds power directly to a DC microgrid serving one floor of the building. Echoing the continued theme of ongoing shared learning, this facility is open to both industry and academia for investigation and testing of these emerging storage and smart grid technologies. 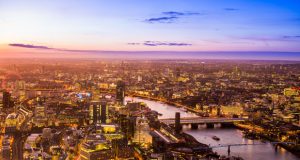