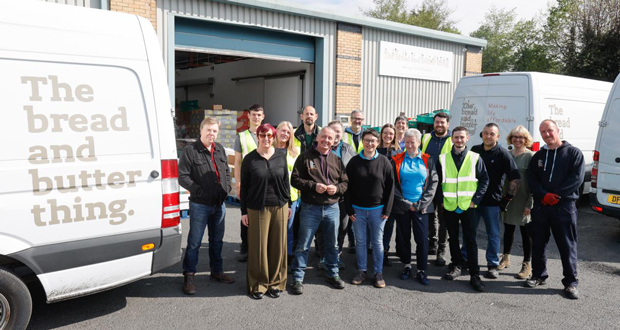 The Sodexo Stop Hunger Foundation is extending its work with food redistribution charity, The Bread and Butter Thing (TBBT), to help provide nutritious food for thousands of families in the North of England while at the same time significantly reducing food that would have been waste.

The Bread and Butter Thing (TBBT) is an award-winning food redistribution charity. It runs over 60 mobile food clubs, taking affordable food into some of the UK’s most impoverished communities. But food is just the start. TBBT uses surplus food as a catalyst to have a transformative effect on people’s lives. It aims to empower people, to enable them to better manage limited funds, connect with their neighbours and reduce loneliness – with the added bonus of encouraging them to eat better.

Due to the ongoing cost of living crisis, TBBT has seen a significant increase in demand for membership. It currently has 27,000 members, and on average, 1,500 new families register every month, with the organisation regularly redistributing over 100 tonnes of food a week – almost 250,000 meals.

Sodexo’s partnership with TBBT began in February 2021. Business in the Community (BITC) brokered the relationship with TBBT and facilitated skills-based volunteering, where Sodexo initially offered support with Salesforce, logistics, and data. Further skills based volunteering, such as supporting with its branding and marketing and regular volunteering slots, are now available for all Sodexo colleagues at TBBT’s Manchester warehouse and community hubs.

Over the past year, the partnership has continued to evolve, with Sodexo utilising its services and network by trialling food redistribution activities that use food surplus and address food insecurity.

In the UK, food insecurity is a significant issue, UNICEF estimated in 2017 that 19 per cent of children under 15 live with someone who faces moderate or severe food insecurity, and although on a global scale, hunger in the UK may seem low, compared to food insecurity levels in the EU, the UK ranks poorly. Hunger in the UK puts it fourth behind Romania, Bulgaria, and Lithuania.

However, food waste produced in the UK could make a huge difference to addressing food insecurity and fighting hunger. Figures from WRAP state that over two million tonnes of the food that goes to waste each year is still edible – that’s enough for 1.3 billion meals.

Healthy Start Vouchers, an NHS benefit that provides weekly vouchers to mothers on low incomes with children under four, are significantly undervalued, with national take up at only 54 per cent. However, they can make a significant difference to diets, offering low income families with young children funding towards fruit, veg, milk, and vitamins. TBBT are one of the few food charities to be taking the vouchers, and they can make a considerable difference to the diet of the families involved.

The Bread and Butter Thing is working at a grassroots level to drive awareness and uptake of the recently digitalised vouchers. Since the start of the year, members of the TBBT team have started visiting hubs promoting the scheme, equipped with a tablet to check eligibility and signing people up while they collect their shopping. In doing so, they can tackle digital exclusion and language barriers at a one-to-one level with a direct positive impact on individuals.

The grant from Sodexo’s Stop Hunger Foundation will go towards a team member’s salary who can train the volunteer teams and expand the delivery of the project across all TBBT hubs in an ongoing and sustainable way.

Claire Atkins Morris, Director of Corporate Responsibility at Sodexo UK & Ireland, said: “I am really excited about the partnership we have built with TBBT. TBBT is giving people the support they need when it’s most needed and ensuring people are empowered to make healthy choices for their families.

“Creating a positive impact is fundamental to our social impact pledge through our people volunteering, our partners like TBBT, our planet redistributing food that would have been wasted, and our places; the communities we live and work. This partnership spotlights how sustainability and society are intrinsically linked.”

Mark Game, CEO of The Bread and Butter Thing, added: “Our work is having a transformative effect in low income communities by reducing stress around food and enabling families to eat healthily and affordably. But we can’t ignore the fact that the rising cost of living is driving demand for our affordable scheme at an unprecedented rate with over 1500 new families registering each month as members.

“Support from Sodexo has been vital in the expansion of our work and I’m excited our continued partnership with them will enable us to continue to grow and help more members.

“We are also grateful to Business in the Community, who has supported this partnership throughout. Their input has been invaluable in keeping us on track and facilitating regular partnership meetings.”

Sodexo is a founding partner of the Stop Hunger Foundation active in 40 countries around the world. Since 2010, the Foundation has donated more than £3.4 million to charities tackling hunger and malnutrition.